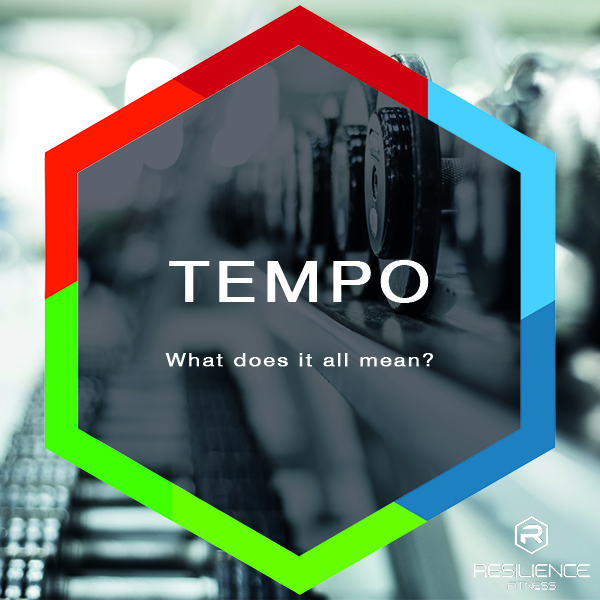 Simply put, tempo is the timing of each repetition for a given exercise.

After a quick search, I’ve discovered that tempo can apparently be determined by anything from your age to your genetic profile. Obviously, I disagree.

Before I get into the use of tempo specifically, let’s just clear up what tempo can and can’t help with.

Consistency – 10 reps at a 40X0 is going to feel very different to 10 reps at 2010. Keeping the timing of reps consistent, gives you a more objective marker of progress.

Emphasis – Slower eccentrics tend to create more muscle damage, which is one of the three key drivers of muscle development. Tempo can also dictate time under tension which is an important exercise variable. Slower concentrics can help to develop control and iron out sticking points. Changing the timing of the movement can change the specificity of the training stimulus.

Gene Expression – The MCT1 gene may affect how quickly you produce and clear lactic acid from your system, so biasing the concentric phase with higher reps may not be suitable. That said, other than for the purpose of getting a killer pump, there’s no real reason you’d use this style of rep, (certainly not with a view to getting better at it).

Fat Burning – This one is a trigger for some people, as there are certainly arguments to be made that different elements of a movement stimulate different hormonal responses when emphasised. That said, the impact of these is so small that you only really need to be concerned if you’re a physique athlete. How many calories you eat accounts for 90+% of fat loss results.

Hormonal Manipulation - Again, I’m not denying that hormones may be affected by tempo, I’m just saying that it ranks quite a way down the list in terms of how big of an impact it has.

For example, we know that one of the things that happens when the body senses an increase in lactic acid, is increasing growth hormone levels.

Allegedly, (I have no first-hand knowledge of this), some bodybuilders find a growth hormone supplementation regime of up to 2-4IU a day (roughly 2-4ml) beneficial for physique change. In a Randomised Control Trial (RCT) in 2018 by Deemer et al, they found an average increase in growth hormone production of 70% for the high intensity vs. moderate intensity exercise group.

Interestingly, that 70% based on my maths and the liberal use of conversion tables equals roughly 0.000007mg/ml, which is way, way, way below the dosage it’s allegedly (ahem) used for performance and aesthetic purposes.

So, the bottom line is, exercise is good for health and it can help improve hormonal function, but not in any way that’s comparable to the supplemental effects of those hormones. So, if someone says you should be doing HIIT training to boost growth hormone levels because blah, blah, blah, tell them to go walk on Lego.

With that said, the two actual benefits of using tempos are pretty cool.

Most people have very little in the way of consistency when it comes to tempo. They’ll typically go with whatever feels most intuitive on the day. Most of those people will also bias the lifting portion of the movement and skip over the lowering phase (concentric and eccentric respectively).

The problem is that in missing or under-emphasising the eccentric, they’re missing out on some of the main stimuli for improvement.

Now some people are ok with the directive “under-control”, whereas most need a little more structure (at least to start with).

One of my clients, unless held to a tempo, will race through the reps because in her words, she just wants to get them done.

Having regular moments of mindfulness has been shown to be beneficial to our overall health and mental well-being. In the words of meditation master Yongey Mingyur Rinpoche, “we can meditate everywhere, anytime”, even if it’s only for one or two breaths.

Tempo gives you a need for consistency that requires a minimal, but almost exclusive amount of focus. That focus in turn has benefits for the multitude of people that need to get out of their own heads once in a while.

Depending on where or from whom you heard about tempo, you’ll likely have seen it expressed as either 3 or 4 digits. Whilst the original format introduced by Australian coach Ian King was 3 digits, I’ve found the 4-digit version popularised by Canadian strength coach Charles Poliquin to be more versatile.

The 4-digit version can be explained as follows:

So, to gain a better idea of how to utilise tempo within your training, using a squat as shown above with a tempo of '32X1.' Each digit typically equates to one second:

3 - The first digit is the eccentric or lowering phase. In this case, it dictates the speed in which you would lower your body (and bar) towards the floor. This is possibly the most beneficial portion of any exercise.

2 - The second digit would indicate either rest or a pause in the position of the exercise that follows the lowering of the weight. This is often referred to as the bottom position, which whilst correct most of the time, is incorrect for a number of cable exercises such as lat pulldowns and triceps presses. A pause in this position, requires you to decelerate the movement and also removes the reliance of many on the stretch reflex.

X – The third digit represents how fast you complete the concentric portion of the lift, or the rate of acceleration. In the case of the back squat, an ‘X’ in place of a number is used to indicate that the movement is meant to be performed eXplosively or as fast as possible.

0 - Lastly, the final digit indicates how long you pause after the lifting component of an exercise. A pause here can be useful to keep technique clean and considered from rep to rep and prevent rushing. It’s worth noting that the pause can be completed either locked out as a brief rest, or just shy of lock out to increase the duration of time under tension.

So how important is tempo really?

It depends on who you ask. If you ask someone who uses tempo a lot, they’ll likely tell you it’s important and vice versa. I use tempo a lot and I find it helpful for most in some form.

However, a lot of it comes down to how invested the client is in results and how aware they are of their movement.

This can be seen here:

If someone has good body awareness and isn’t super-focussed on results, then I’ll give them general guidelines and only occasionally use tempo on a new exercise or if it would be particularly beneficial. If the client is easily distracted to the point it compromises technique, then I’ll often use tempo as a way of keeping their mind on the exercise.

You get the idea.

Hopefully that gave you some information or perspectives you didn’t have and leaves you better off in some way than before you read all this.

If you liked the article, consider subscribing to my newsletter. I don’t send it out very often, but when I do, it’s witty and informative. Or you can follow me on Instagram, YouTube and Facebook using the links below.